Last week seven of us did a six day, 325km tour over the Grampians to try and see some meteorites from the geminid meteor shower.

The first day began early with a 7:20AM train from Southern Cross to Warnambool. Only half the crew was on the train, the rest having gone day the night before. The seven riders met up at a cafe to receive our official ride spoke card and have an early lunch before we set off. It was only after setting off two people realised they’d never paid.

We bought supplies for day 2 breakfast, lunch, dinner and day 3 breakfast at the Supa IGA near the train station.

A post shared by Steven Taylor photography (@steven_taylor_photography) on Dec 10, 2015 at 4:19pm PST

The first day was a short one. This is mostly uninteresting cattle country. It was warm enough to end up with lots of flies, of which I swallowed 3. Just over 40km to the historic Hawkesdale pub. Which is where we ate and stayed the night. Accomodation was $30/head in shared rooms. There was a pool across to road but I couldn’t be bothered getting my only crop wet. 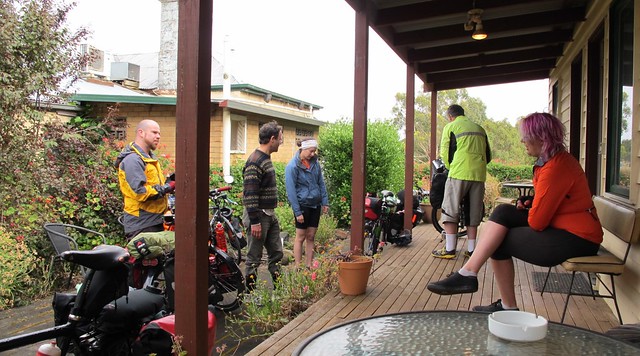 Woke up pretty early to have breakfast of cereal on the patio of the rear bedrooms. This was another short day of riding, around 50km, and one with a tail wind most of the day. It was wet and we had to keep our rain jackets on more or less all day. 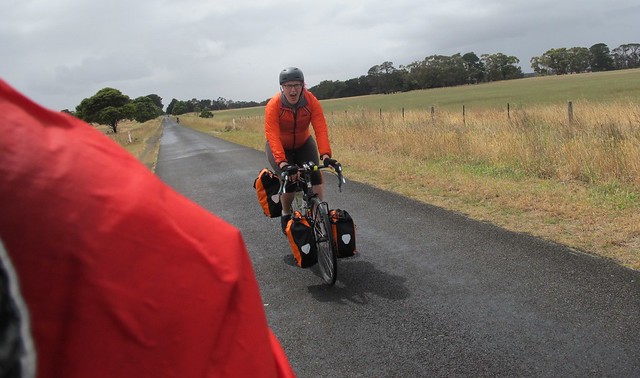 We stopped for lunch in a grassy field alongside a farm accessway, which I thought was pretty neat. Lunch was flatbread, tomato, avocado and hommus. 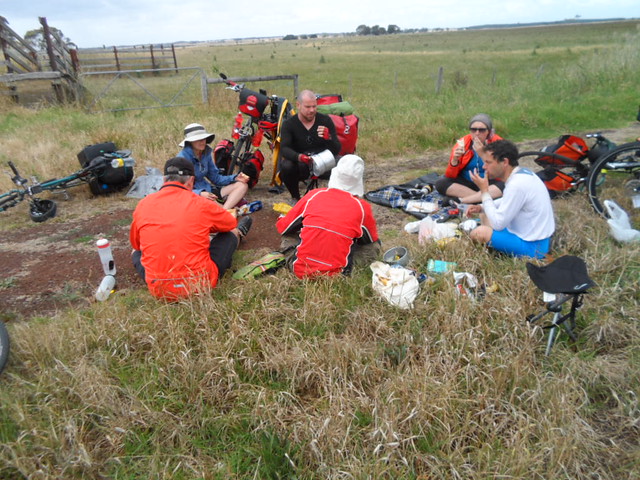 A post shared by Steven Taylor photography (@steven_taylor_photography) on Dec 11, 2015 at 2:11am PST

Mt Eccles National Park is a small piece of land around an extinct volcano under indigenous co-management. It’s a sacred site where Budj Bim is said to be resting (the summit is his head). There are a number of lava caves, a crater lake and a collapsed lava tunnel you can see in a couple of hours hike.

The campsite features hot showers, although the we learned this means you’re meant to book and its $50/site. We totally could have fit in one site, just because we were spread across 4. There’s untreated tank water and mobile reception (which is good as we had to book). 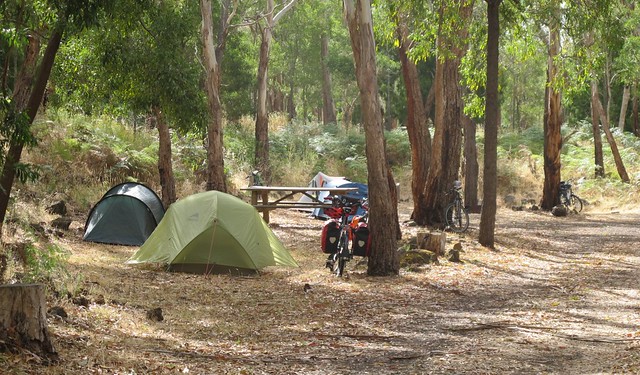 Day 3 was a longer day: around 70km all up. Our lunch destination was Hamilton. The only town of note in the morning was Byaduk, which was mostly a cricket oval and a antiques store (the lady there is lovely). After Byaduk there’s a pretty substantial climb over the end of Mt Napier state park.

In Hamilton we went to a cafe to eat and steal some electricity to charge our phones. Hamilton is also a reasonable sized town, which gave us opportunity to restock on supplies. Visited Coles to buy supplies for dinner, all three meals on day 4 and breakfast on day 5. 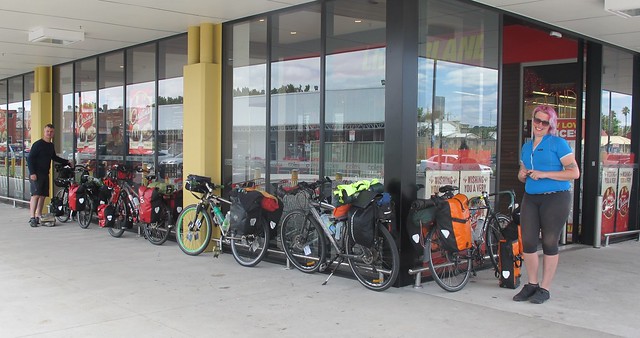 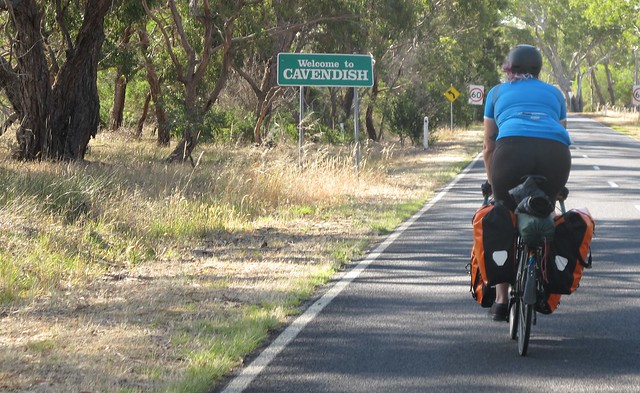 It started to get quite hot in the afternoon and so the Cavendish pub was welcome relief. We discovered that the general store, where you used to pay to use the campground was no more, but instead the campground relied on the honest box system. Camping was $5/head unpowered, but there was lots of power around, as well as mobile reception and scheme water.

Dinner was quite excellent, with spicy bbqed tofu cutlets and kale and almond salad plus quinoa.

Day 4 was the hardest day of riding. Around 80km, hot, mostly into the wind with about 30km of gravel. I was also starting to get tired and it became obvious it was important to pace myself. 30km into the ride you climb Victoria Point, which is the tail of the Grampian ranges, it’s a great place to stop for a cup of tea. About another 20km gets you to Mirranatwa. 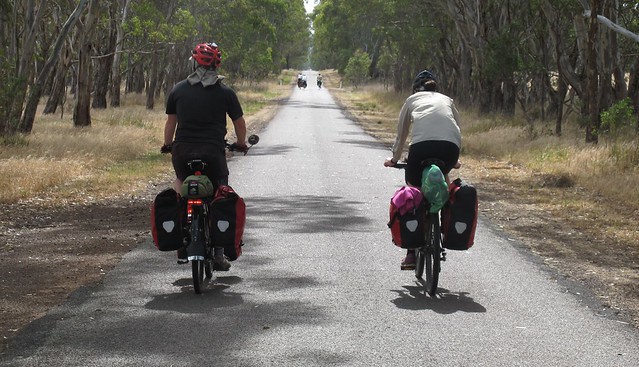 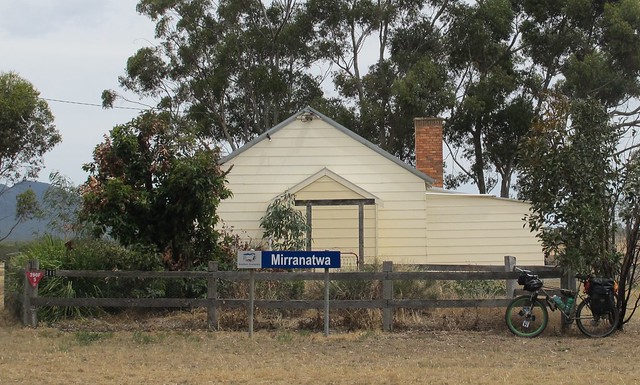 Mirranatwa is really just a church and tennis courts. It had been hot and we were exhausted. We ate lunch on the back patio of the church and refilled our water from their tanks (which was so deliciously cold). Had a little bit of a sleep before the push into the national park.

The road through the national park was gravel and at times highly corrugated. At other times quite slushy and resulted in a couple of epic power sliders. We stopped at the Murra Murra reservoir with ideas of a swim, but it was more or less a dried up marsh. We kept going to Paddy’s Castle.

A post shared by Steven Taylor photography (@steven_taylor_photography) on Dec 13, 2015 at 5:30pm PST

A post shared by Steven Taylor photography (@steven_taylor_photography) on Dec 13, 2015 at 5:34pm PST 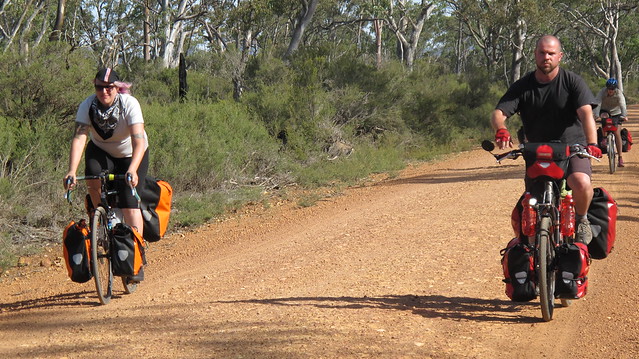 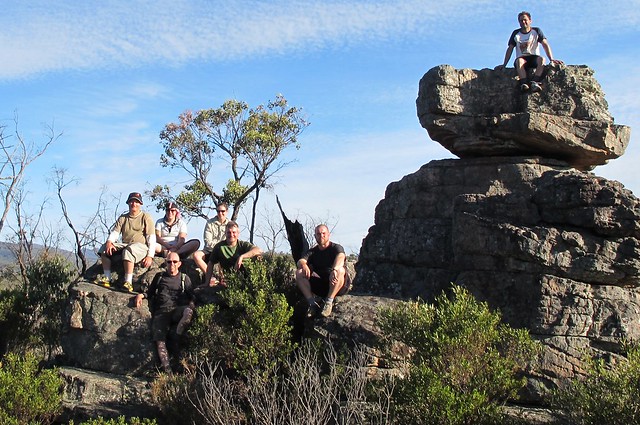 Such a relief to get to the campsite until we discovered the water tank was dry. Thankfully there was enough spare water to go around thanks to one rider’s partner joining that night by car and bringing a spare 15L. Dinner was reheated Indian curry MREs bulked up with steamed vegetables, quinoa and rice. The campsite again requiring booking at $36/site. We totally reckon we could have fit into 1 site. No mobile reception.

Managed to see a couple of meteorites.

Day 5: Grampians National Park to Halls Gap via the Balconies

Day 5 was a short day where we went up Mt Victory to the Balconies and then back down into Halls Gap. The up side started with 10km on gravel, which I quickly established I didn’t have enough gears for and ended up walking a significant amount of the way (I was also hung over). We reached the road and hid our panniers in the bushes to finish the climb. The rest of the climb was quite doable until one little switchback of 7%. That was a killer.

On the other hand the descent into Halls Gap was lovely. Must have hit around 60kph, stopping just once to recollect our gear. Made it into Halls Gap for lunch. The caravan park was luscious. I don’t understand how something can be so green, needing so much water given how dry the reservoir was. At the same time I was so happy for the swim we got to have. 2 unpowered sites (they were much stricter on site usage) cost us $90. Mobile reception, scheme water and lots of power points around.

I really could have done with an easier day to finish. Although only 50km with the first 35km being fairly easy it was hot and I was extremely worn out and saddle sore. We stopped at Moysten for a coffee before tackling the last 15km which was some fairly steep climbs up the side of Mt Ararat. 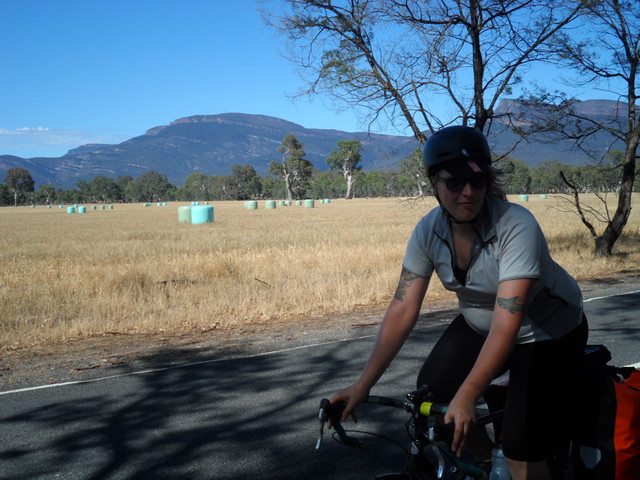 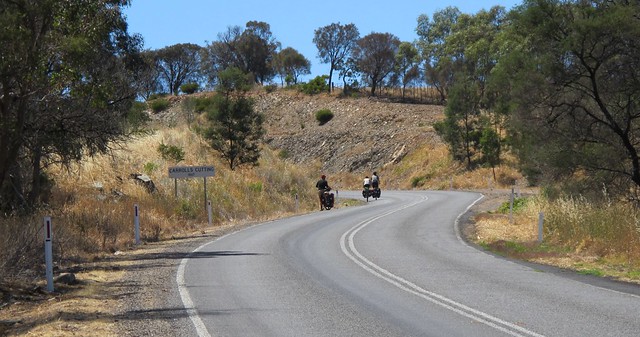 Tiredness and temperature meant I stopped at practically every tree because I thought I would collapse. There was so much heat coming off the road. We ultimately split into two groups, with one group aiming for the earlier train and the other just seeing what they could do. We finally made it over the climbs and got a short descent into Ararat. Asked a car stopped at the lights for directions and realised we hadn’t missed the train. Rode onto the platform at Ararat station with 4 minutes to spare. Bought tickets on he train. Well I had one bought for me, as all my money was now embedded in molten chocolate.

Ate my weight in salt and fat at Lord of the Fries before getting the Metro home. Showered and crashed. Total distance around 320km with 2400m of climb. Saw some absolutely fabulous sites. Need more gears.